On the monument to Charcot that stands in front of Askja, the natural Sciences building at the University of Iceland, is a bas-relief of Jean-Baptiste Charcot that was unveiled on November 14, 1953 by Iceland’s prime minister Ólafur Thors. The relief bears the text:
Dr. Jean-Baptiste Charcot
Born in Paris 15.7.1867
Died at sea when his ship Pourquois-Pas? on Þormóðsskeri 16.9.1936.
He loved Iceland so here shall his memory and that of his ship live on.
One might say that this monument is somewhat of a declaration of cooperation and friendship between Icelanders and the French.
What has been accomplished through this declaration since 1953 in the spirit of remembering Charcot? Besides the monument mentioned above, some other examples of the ongoing spirit of Charcot in Iceland are:
1. Some of the crew of the Pourquois-Pas? are interred in Fossvogur Cemetary in Reykjavík.
2. A monument has been placed at the beach of Straumfjörður á Mýrum from which one can clearly see the skerry Hnokka, which was the cause of the sinking of the Pourquois-Pas?
3. Icelandic sculptor produced a monument dedicated to the crew of Pourquois-Pas? in Fákrúðsfjörður and a cast reproduction of this monument was sent to Saint-Malo, Brittany in France, where the ship was built. This reproduction was a gift presented to the French nation by the Minister of Education, Björn Bjarnasson, during an official visit in 1998.
4. Icelandic movie director Kristín Jóhannesdóttir released the movie “On Earth As It Is In Heaven” in 1992, which was based in part on the sinking of Charcot’s ship.
5. Skúli Halldórsson composed a cantata in remembrance of the Pourquois-Pas? crew.
6. At least two books influenced by Charcot’s story where published around the middle of the last century. Charcot on Antarctica was abridged and translated by Sigurður Thorlaucius. Þóra Friðriksson published the book Dr. Jean-Baptiste Charcot, which is an intimate look at her friendship with Charcot and her time as president of the French Alliance.
7. Jean-Christophe Victor and Anne-Marie Vallin-Charcot on September 14, 2006 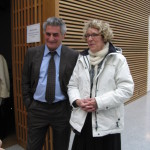 at a conference about Charcot at the University of Iceland, two days before the 70th anniversary of the sinking of the Pourquois-Pas? Since then, annual lectures have been presented about the life and scientific contributions of Charcot at the University of Iceland and at the French Alliance in Reykjavík. Among the key note speakers were Jean-Christophe Victor and Anne-Marie Vallin-Charcot.
8. In September of 2006, the book Jean-Baptiste Charcot – Explorer of the Seas, 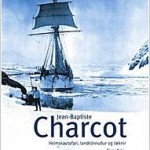 Navigator of The Poles by Serge Kahn was published (JPV – publisher).
9. On September 16, 2006 the exhibit Tjernehúsi í Englandingavík was opened in Borgarnes to commemorate the passing of 70 years since the sinking of Charcot’s ship. In the exhibit were gathered many memorabilia from the ship to create as much of a feel for the vessel as possible.
10. In the Borgarfjörður Museum there is a model of the Pourquois-Pas? and a monument to the crew, along with an account of their story.
11. In February of 2007, the exhibition “Attraction of The Poles” opened at the Sudurnes Science and Learning Center to educate the curious public about Charcot’s scientific expeditions.
12. In addition, there have been historical television programs, such as such as those by Árni Óli, and the articles Elín Pálmadóttir published in Morgunblaðið about Charcot and communication between France and Iceland through history. Also, the book Fransi Biskví. 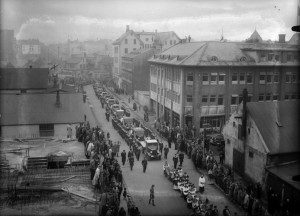 One other indication of the importance of Charcot in the historical context of Iceland is in the article Halldór Laxness wrote for the magazine Mál og Menning (Volume 3, 1941) under the title “Iceland and France”. In this account, Laxness described Charcot and the sinking of his ship, the suffering endured by the sole survivor—Gonidec, and the funerals in Reykjavík, Saint-Malo, and Paris. The article ends thus:
If a man has once understood a nation’s sorrow, he becomes inextricably bound to her forever.