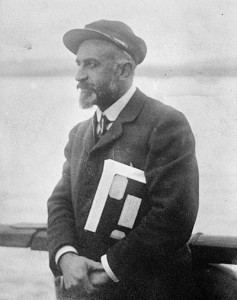 The famous French polar explorer dr. Jean-Baptiste Charcot (1867-1936) was one of the great explorers of Antarctic and Arctic waters at the beginning of last century. Other great names from that time were Amundsen, Scott, Nordenskjold and Peary.
At the beginning of the last century he planned and led two expeditions to the southern hemisphere and mapped large part of the coastline of Graham Land on the Antarctic Peninsula. He was the first French explorer to over-winter in Antarctic waters with his crew, first on the vessel Français (1903-1905) and later on the Pourquois pas? (1908-1910).
After the Second World War he planned and lead numerous multidisciplinary expeditions to Arctic waters, for instance to the Faeroe Islands, Iceland, Jan Mayen and Greenland.